Helping You Navigate Gem Shows Since 2002

For nearly 20 years, Xpo Press published high-quality, full-color gem show guides to assist not only the show attendee but also to provide effective advertising opportunities for shows, vendors, and local businesses. The Covid-19 pandemic forced us in 2021 to cut back to only publishing EZ-Guides for the Tucson and Denver Showcases. This page is an archive of the gem show guides we published prior to the pandemic. It's not clear yet whether or not we will get back to publishing guides for shows other than Tucson and Denver. Nonetheless, Xpo Press remains the industry leader in online and print advertising for gem shows and the vendors who sell at them.

⇒107,000 distributed at top gem and mineral shows and showcases in the U.S.A. — Tucson, Denver, NJ Show (Edison, NJ), Quartzsite (AZ), Franklin (NC), East Coast Show in MA, and West Coast Show in CA. It featured a map of the Gem Shows of North America and a calendar of over 750 gem, mineral, fossil, jewelry, and bead shows in the U.S. and Canada.
⇒19,000 inserted in the Wall Street Journal and distributed to regional subscribers with an average household net worth of $3.7M. These inserts connected our advertisers with the world's most powerful business leaders, active investors, and affluent luxury consumers who are known to make investment purchases of jewelry, gold, minerals, and high-end home decor products. 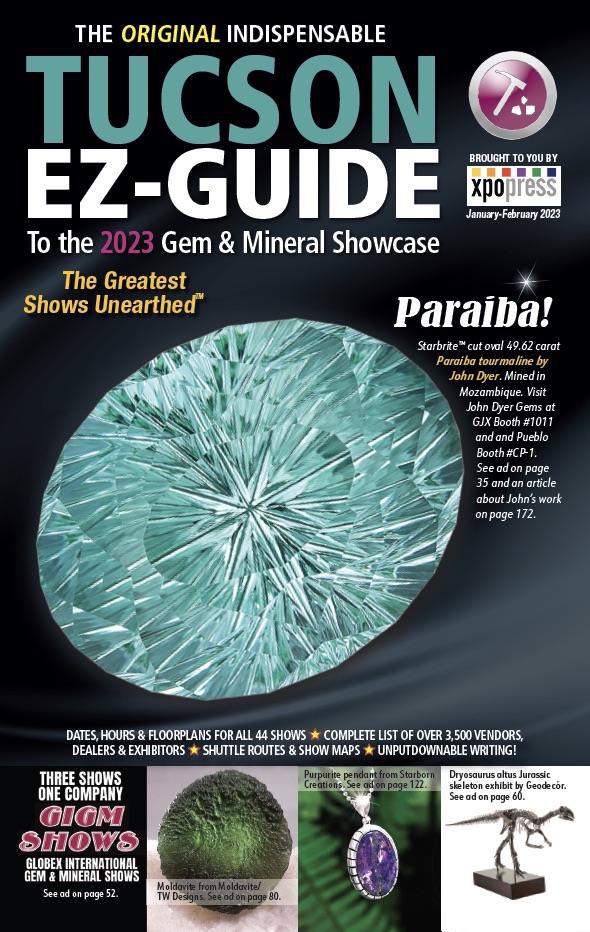 View online edition of this guide
Have this guide mailed to you
More about this showcase
Tucson EZ-Guide - Still publishing!


The 200+ page Tucson EZ-Guide is a 35,000-circulation (20,000 in 2022, as we're not yet sure how attendance will be at the shows), full-color guide that is distributed at local hotels and restaurants in Tucson, on the gem show shuttle routes, at Tucson International Airport, and at the 50+ shows of the Tucson Gem, Mineral & Fossil Showcase. The guide features articles pertinent to the Tucson Showcase, show dates and hours, show floorplans, citywide show maps, and a complete list of nearly 4,000 vendors. Buyers and sellers alike have been enjoying the Tucson EZ-Guide since 2004, as it quickly became Tucson's best, most engaging, easiest to read gem show guide, and also the most effective publication to advertise in. 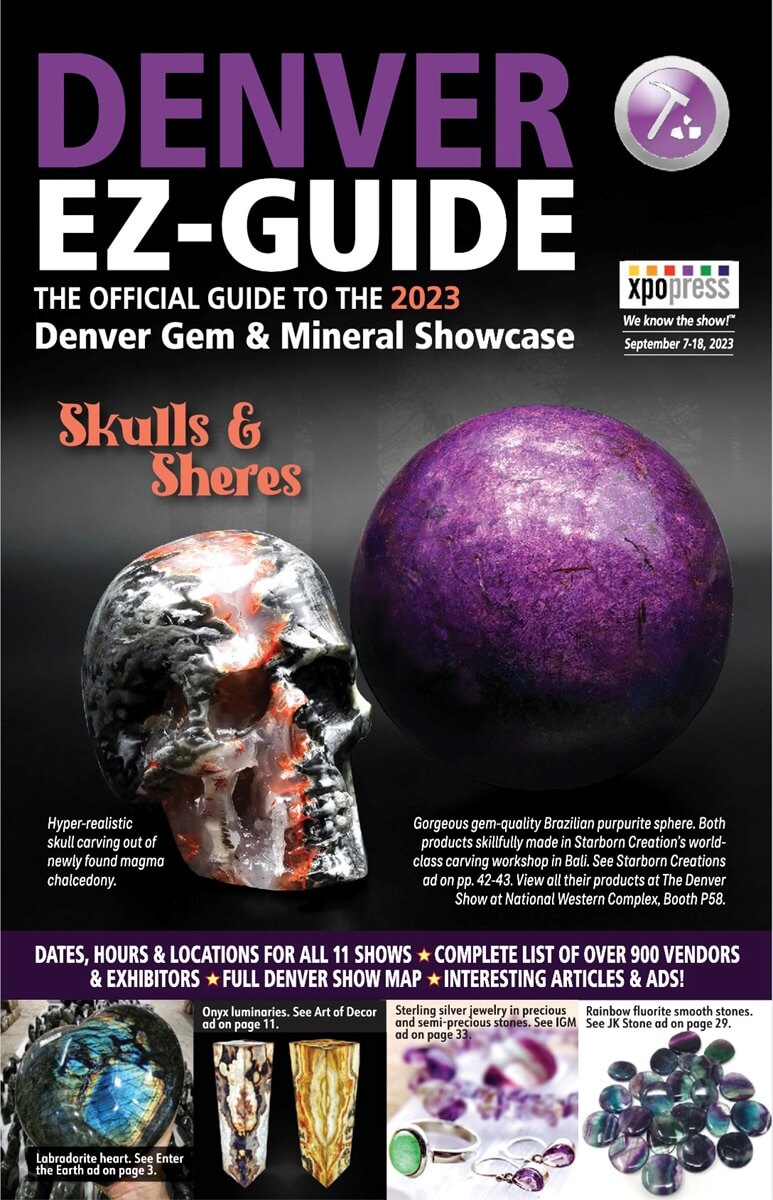 View online edition of this guide
Have this guide mailed to you
More about this showcase
Denver EZ-Guide - Still publishing!


This is the official guide to the annual Denver Gem & Mineral Showcase in September. The full-color, 9,000-circulation Denver EZ-Guide promotes the 13 gem, mineral, fossil, and jewelry shows all happening simultaneously for 10 days in September — publishing show dates, hours, addresses, contact information, floorplans and maps, and a complete list of all 900 dealers and vendors at the show. The guide also contains feature articles written by expert rock, mineral, and lapidary writers in the industry. Distributed on special racks at all 13 Denver shows. 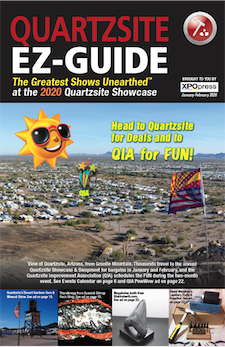 
This was the Official Guide to the annual Quartzsite Showcase & Swapmeet. The full-color, 25,000-circulation Quartzsite EZ-Guide promoted the 10 shows and various swapmeets open for business every December thru February. It contained show dates, hours, addresses, contact information, floorplans and maps, and a complete list of every dealer and vendor at the shows, and some great articles for readers to enjoy. The guide was distributed on special racks at all of the shows and many local businesses during show time each year. 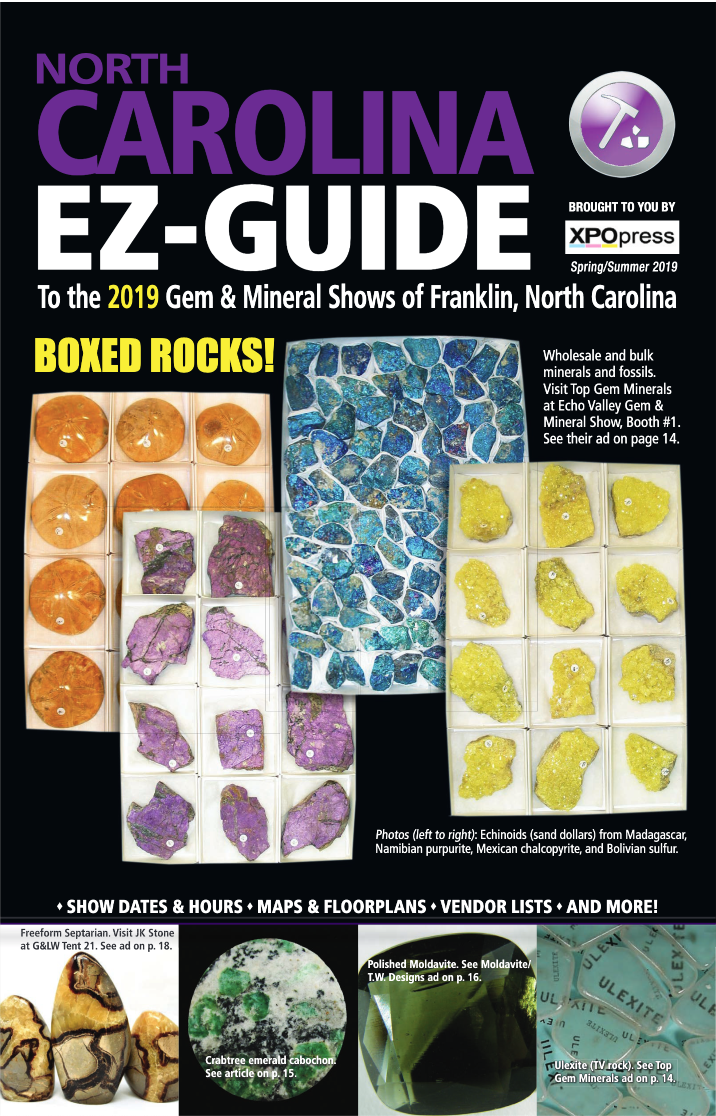 
This was the official guide of the Arizona Mineral & Fossil Show. For years, this show was the largest strictly mineral and fossil show during the annual Tucson Gem & Mineral Showcase in January and February. This 5,000-circulation publication was distributed annually at the three AMFS locations in Tucson: 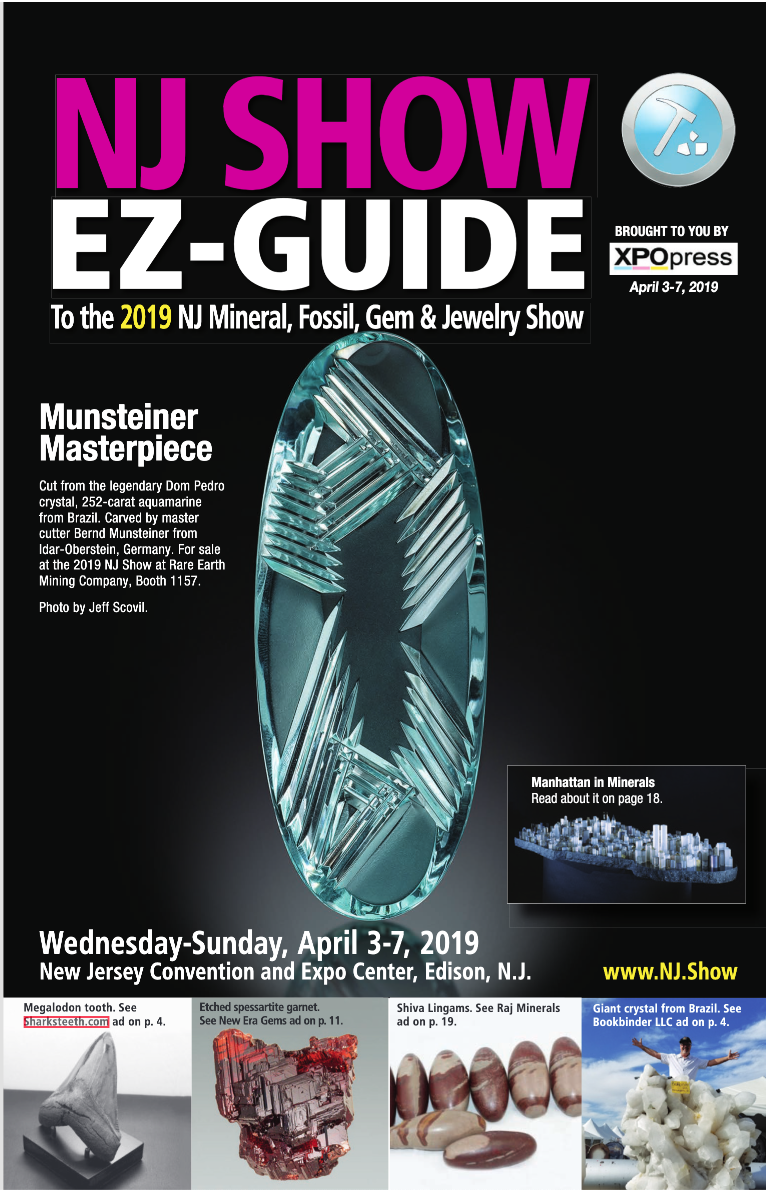 
This was the Official Program of the NJ Gem & Mineral Show, a 7,000-circulation publication distributed in April in two ways: First, the weekend before the show 2,000 were inserted into regional Wall Street Journal and delivered to subscribers in East New Jersey and New York City, then 5,000 were distributed free to attendees of the show at the New Jersey Exposition Center in Edison, N.J. The guide contained show maps, a full vendor list, and feature articles related to the products sold and dealers represented at the show. 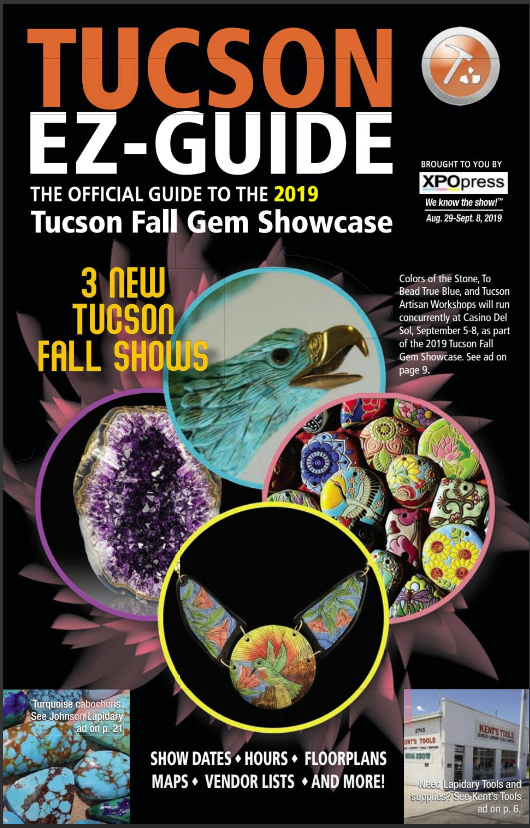 
The Official Program of the Tucson Fall Gem Showcase, this 5,000-circulation publication was distributed in two ways: First, to promote the three September gem shows and vendors to potential new buyers, 2,500 guides were inserted in the local Wall Street Journal and distributed — on the weekend before the shows open — to WSJ subscribers/readers in Tucson. Additionally, 2,500 were distributed on racks at the shows — G&LW Holidome, JOGS Gem & Jewelry Show, the Gem & Jewelry Show on Grant, and Kent's Tools, Jewelry, Lapidary & Supplies Show.

View online edition of this guide
Have this guide mailed to you
More about this show
East Coast Gem, Mineral & Fossil Show Directory


This was the Official Program of the East Coast Gem, Mineral & Fossil Show, a 5,000-circulation publication that was distributed in two ways: First, to promote the East Coast Show and its dealers to potential new buyers, 2,500 programs were inserted in the regional Wall Street Journal and distributed on the weekend before the show opened to WSJ subscribers/readers in Boston and Springfield, Mass. Additionally, 2,500 were distributed in August to attendees of the show at the Better Living Center at the Eastern States Exposition in West Springfield, Mass. 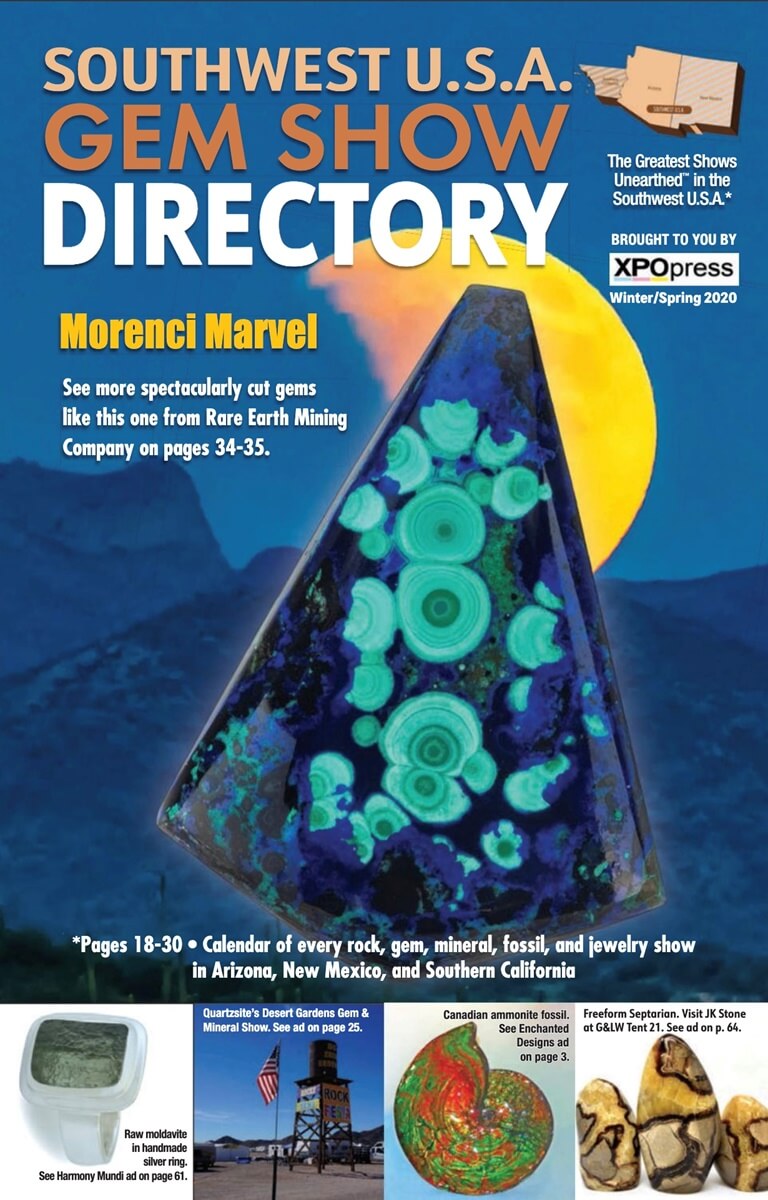 
This 13,000 biannual guide promoted not only the Tucson and Quartzsite Showcases and featured a map and calendar of all the gem, mineral, fossil, jewelry, and bead shows in the Southwest U.S. states — Arizona, Southern California, and New Mexico. Circulation was 13,000 — in Jan.-Feb., 8,000 were distributed at the Tucson Showcase and 3,000 at the Quartzsite Showcase, then 2,000 were distributed at shows in the Southwest U.S. states through August.


This guide was distributed twice annually at every gem and mineral Showcase and other top shows in the United States — Tucson, Denver, NJ Show (Edison, NJ), Quartzsite (AZ), Franklin (NC), East Coast Show in MA, and West Coast Show in CA. It featured a map of the Gem Shows of North America and a calendar of over 750 gem, mineral, fossil, jewelry, and bead shows in the U.S. and Canada. 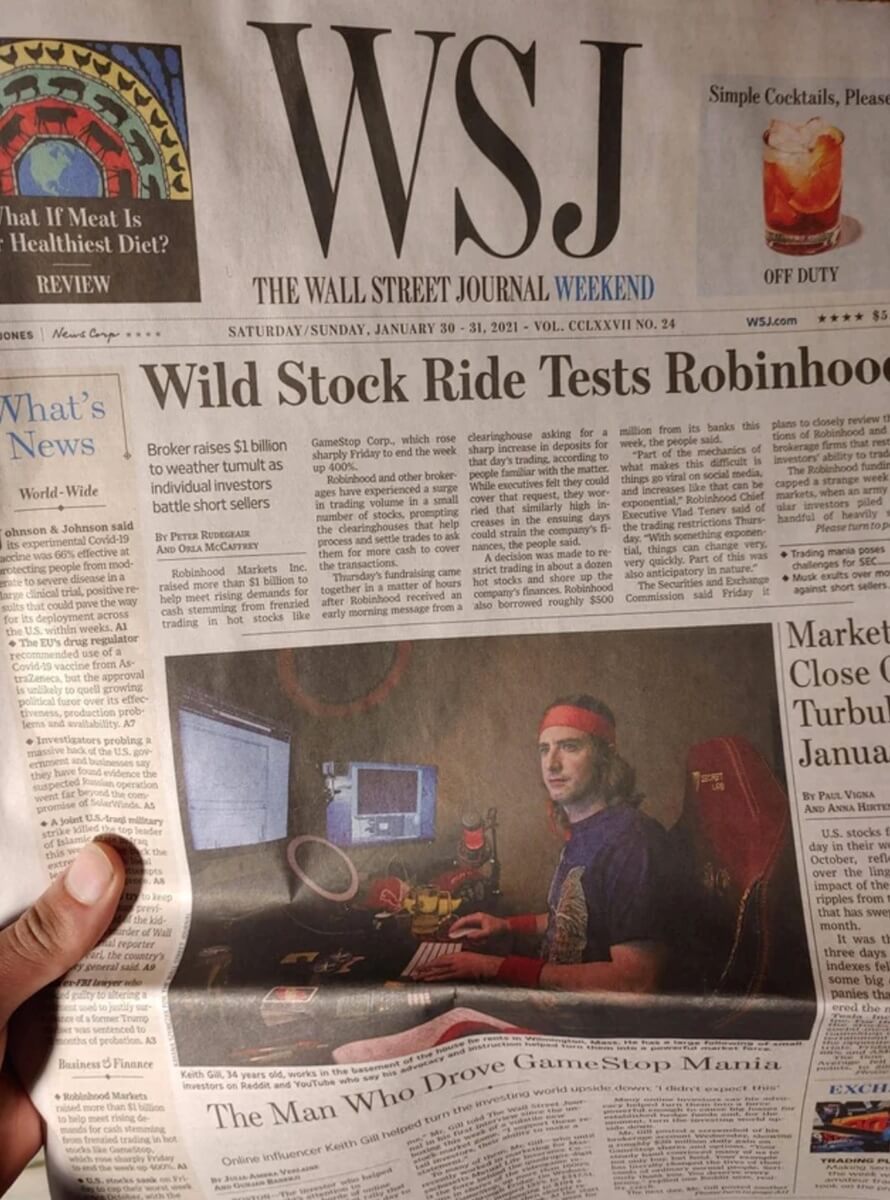 
Xpo Press published a 52-page gem show guide for TWO 5,000-piece insertions in the Tucson and Phoenix editions of the Wall Street Journal, on the fourth Saturday in December and the third Saturday in January. This insert promoted both the famous Tucson and Quartzsite rock, gem and mineral Showcases taking place in Arizona in January and February and provided great exposure for advertisers to a high-income demographic that is statistically reported to make luxury-item investments — such as jewelry, mineral specimens, or unusual home decor items.