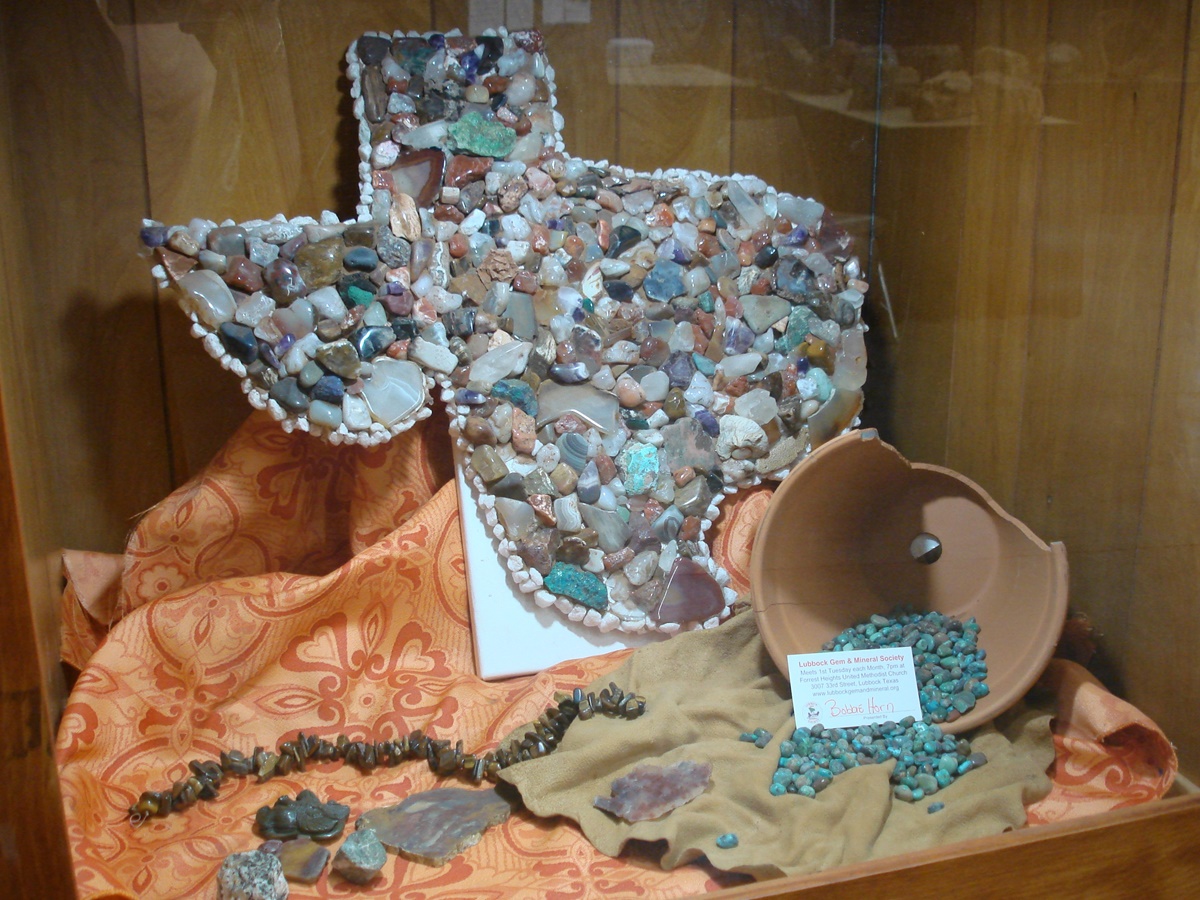 The city of Lubbock lies in the windswept plains of West Texas. Thousands of cows and sheep roam freely beneath the incessantly running oil rigs and windmills that dot thousands of acres of flat farmland. It is a region known historically and geographically as Llano Estacado (Staked Plains) that encompasses part of eastern New Mexico and Northwest Texas. With approximately a quarter million residents, Lubbock is the county seat for Lubbock County and a center for economic, educational and health care services in the region.

Lubbock is home to the Lubbock Gem and Mineral Society (LGMS), a non-profit organization formed in 1958. The society holds an annual gem and mineral show, and my husband and I have participated as dealers since 2017. I have also given two lectures there. The current LGMS president is Valerie Zink, and the very energetic Walter Beneze - a past LGMS President and SCFMS President, continues as the LGMS show’s chairman.

Out-of-town visitors will find the area rich in history that spans a period from the age of the dinosaurs to recent ranching. The Museum of Texas Tech University (TTU) and the Lubbock Lake Landmark are two major museums with exhibits on the dinosaurs and mammoths that roamed the plains of prehistoric Texas. We also enjoyed the American Wind Power Center and the Buddy Holly Museum.

The 63rd Annual Lubbock Gem & Mineral Show will be held this year on September 25 and 26, 2021, at the Lubbock Memorial Civic Center, 1501 Mac Davis Lane. In past years the show was held in May, but since the COVID-19 pandemic last year, they moved the show to September. The club is honored to be hosting again the South Central Federation of Mineral Societies (SCFMS) Annual Convention, and hold a show with special exhibit cases and an awards dinner.

About 22 dealers participate in the show, selling jewelry, loose gemstones, lapidary rough, cabs, slabs, geodes, beads, mineral specimens, fossils, spheres, and lapidary tools. We enjoy getting farther away from Arizona, where we meet new vendors. The club hosts a fantastic dinner on Friday night for all dealers and club members, a wonderful opportunity for dealer-member camaraderie.

A truly impressive part of the show is the non-competitive exhibits. Between 60 and 70 cases are filled with extraordinary specimens and displays. The 1:3 ratio between dealers and exhibit cases is phenomenal, and demonstrates a high level of member participation and their willingness and enthusiasm to share their finds and creations with others. Some of my favorite exhibit cases from recent years include a Texas map created with tumbled rocks, Mexican onyx rough specimens and sculptures, Obsessed with Obsidian, handmade marbles, the Vanishing Gembone, spheres, petrified wood, and the Dinner Table.

Two special educational features set this show apart from others. Lecture presentations, which are given mostly by geology experts at a side area of the show floor, and cabbing and sphere-making demonstrations given by club members. Lots of people watch and inquire about techniques and classes. There is also a fluorescent display of minerals, a favorite attraction at gem and mineral shows for young and adult attendees.

At the wonderful club-sponsored area young visitors have fun spinning the Wheel of Fortune, play educational games, and buy grab bags. At the LGMS club information table, members run a silent auction with many beautiful specimens and award hourly door prizes. At the club’s merchandise booth, bright T-shirts and coffee mugs (my favorite) with dinosaur graphics are offered for sale.

If you live in the Lubbock area, I urge you to become a member of the LGMS (http://www.lubbockgemandmineral.org). There is so much knowledge shared among members, and opportunities for learning, rockhounding, networking, and sharing your artwork. The LGMS annual show is a great community outreach event, and proceeds help fund the club’s projects. The club is actively pursuing and fundraising for a future lapidary and jewelry workshop home. We look forward to returning to the Lubbock gem show this September and seeing all our friends. Hope to see you there!

The Museum of Texas Tech University

Visitors can see fossil remains and replicas of the great animals that lived during the Ice Age and learn about the Southern Plains cultures that have inhabited the area for the past 12,000 years. Skeletal replicas of full-size Tyrannosaurus rex and Triceratops horridus dinosaurs welcome the visitors as they enter the museum. We were drawn to the dinosaur gallery A Changing World, where exhibits explain how the local dinosaurs lived 228 to 65 million years ago, and how they are classified. An impressive skeletal replica of a Columbian mammoth (Mammuthus columbi) is prominently displayed in the center of the Ice Age On the Southern Plains exhibit.

The Columbian mammoth is an extinct elephant, native to the grasslands of southern North America. Its ancestors migrated to this continent by crossing the Bering Strait land bridge from the Russia. These mammoths inhabited the Lubbock area and their remains were found at the site of the Lubbock Lake Landmark. Columbian mammoths were larger than modern elephants, weighing 8 to 9 tons and standing 10 to 13 feet tall at the shoulder.

We also enjoyed the Diekemper Gallery of Pre-Columbian Art, with amazing artwork from Colombia and Panama. On exhibit are handmade pottery with incised designs dating from between 300 AD to 1400 AD, gold necklaces and earrings with figurative design elements, and beaded jewelry from the Tairona and Sinú people of Colombia. This gold jewelry was made of an alloy of gold and copper called tumbaga, a name given to it by the Spanish conquistadors.

The Museum of Texas Tech University (www.museum.ttu.edu) is located at 3301 4th Street in Lubbock. It is open every day except Monday, and admission is free, except for the shows at the Moody Planetarium.

The Lubbock Lake National Historic Landmark is an important, active archaeological excavation site and nature preserve. It sits on 335 acres, and is a protected state and federal landmark. Several large bronze sculptures of elephants, bison, a bear, and an armadillo - guardians of the nature preserve- welcome the visitor. Three trails, with a combined length of 4.5 miles, take the visitor through the shortgrass plains habitat, where scientists have documented over 130 plant species, 140 bird species, and the threatened Texas horned lizard and bobwhite quail.

The site contains evidence of almost 12,000 years of occupation by the ancient peoples of the Southern High Plains, from as early as the Clovis Period. Artifacts were accidentally discovered in 1936, and since then the museum has governed the preservation and research at the Landmark. The exhibits Reading the Rocks, showing the stone materials and tools found at Lubbock Lake and The Puzzle at the End of the Pleistocene were very informative.

Folsom points, made out of Alibates chert, chalcedony and obsidian, were found at Lubbock Lake and are on display in a wonderful exhibit on flint-knapping. Folsom points, named after Folsom, New Mexico, are extremely thin-knapped stone projectile points with fluting on one or both sides of the biface.

The Lubbock Lake Landmark (http://www.depts.ttu.edu/museumttu/lll/) serves as a fascinating window into the past. It is just minutes away from the TTU museum and is open every day except Monday. There is no entry charge, but donations are encouraged.