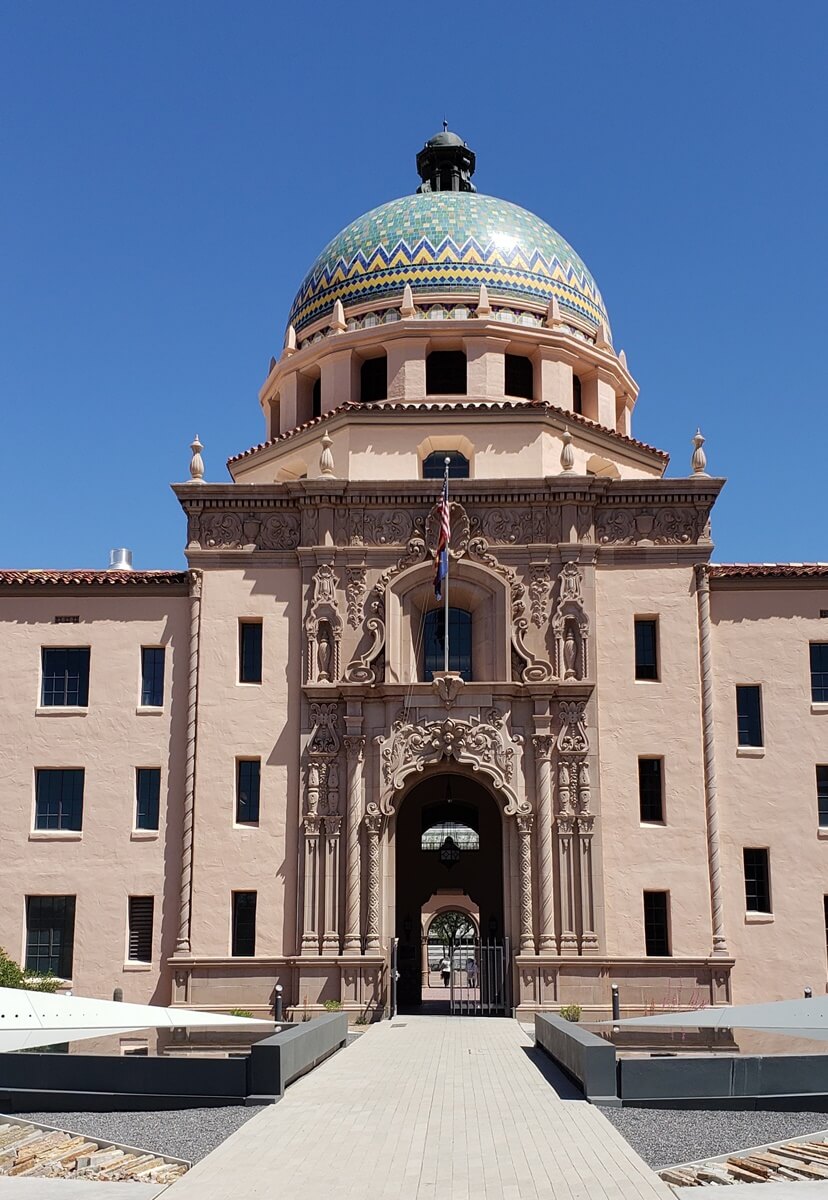 The much-anticipated opening of the newest museum in Tucson, the University of Arizona Alfie Norville Gem and Mineral Museum (ANGMM) happened this past summer, first with limited ticketed guided tours. The museum then opened to the public in August 2021. A Grand Opening event will probably happen during the 2022 Tucson Gem shows in February.

The ANGMM is magnificent inside and outside. The spectacular building is the historic Pima County Courthouse, built in 1929 in the Spanish Colonial Revival architecture style, with its colorful mosaic tile iconic dome and spacious courtyard. The courthouse was added to the National Register of Historic places in 1978. Along with the museum, the courthouse is home to the Southern Arizona Heritage & Visitor Center, January 8 Memorial, Visit Tucson, and Pima County Administration.

As per the museum’s statement, “the ANGMM is dedicated to providing public education, the preservation of minerals and meteorites, while also serving the research needs of professionals, students and collectors. The collection is world-wide in scope, but with specific emphasis on minerals from Arizona and Mexico.”

The museum evolved from the original University of Arizona (UA) Mineral Museum. The university established the Mineral Museum in 1893. It was a Territorial Museum at the time, until 1912 when it became a State Museum after Arizona became the 48th State in the Union. The museum and its collections moved around to several buildings, until its most recent location move in 1993 into the lower level of the Flandrau UA Planetarium and Science Center. Dr. Robert T. Downs became Museum Curator in 2008. A few years later, discussions began about moving the collection, and the opportunity came with the availability, restoration, and renovation of the historic Pima County Courthouse. Construction for the new museum began in 2017 and was completed earlier this year.

https://storagexpopressprod.blob.core.windows.net/siteimages/153.pngThe museum is named after Tucson’s real estate developer Allan Norville’s wife, Alfie. Her portrait hangs at the museum’s entrance. Norville provided the initial gift for the new museum to memorialize his wife, who played a key role in the mid-1990s persuading the gem shows to remain in Tucson and not relocate to Phoenix or Las Vegas. In 1993, the Norvilles founded the Gem & Jewelry Exchange (GJX), one of the major wholesale gem shows that sets-up a large tent across from the Tucson Convention Center.

My husband and I had the opportunity to visit the museum in late March 2021, when we went to install my jewelry and specimens in the Old Pueblo Lapidary Club case. I was honored to be asked to showcase my work as part of the club’s activities. We met with museum manager — my friend and fellow graduate FGA gemologist Eric Fritz — along with Selena Valencia, assistant manager, and Elizabeth Gass, exhibit specialist, who all helped set up the case. After that, they were happy to show us around the museum, and gave us a private guided tour.

The museum has beautiful, wall-to-ceiling, state-of-the art cabinets with LED lights highlighting each mineral specimen and jewelry. Glass shelves are suspended, allowing items to be viewed better. Several educational exhibits are interactive and will be a great hit with visitors. Besides the museum’s own collections of minerals, gold, gems, and meteorites, a number of special items are loaned by private collectors, making exceptional specimens accessible to the museum visitors.

The museum’s galleries are spacious and well-organized with three major sections, including the Mineral Evolution, the Arizona Mineral Gallery, and Gem Gallery. In the Mineral Evolution gallery, minerals, fossils and meteorites tell the story of the earth’s evolution, and how we rely on minerals today in our daily lives. In the Arizona Mineral Gallery, besides the many Wulfenite mineral specimens (Arizona’s official mineral), a fabulous replica of an underground stope at a Bisbee copper mine has a number of azurite, copper, and calcite specimens embedded in it. The Crystal Lab section shares the story of how minerals are created in the earth, and great educational interactive video screens describe the chemistry and physical properties of gems and minerals.

We loved the pegmatite gem mine pocket display showing how tourmaline, kunzite, and quartz crystals are discovered all together when nature’s magic happens. We were also attracted to the wonderful fluorescent display cases, which include a terrific case full of Arizona fluorescent minerals. We also loved the gem and jewelry cases, especially the one titled “Light and Dark Materials” showcasing transparent and opaque gemstones, telling the importance of light interacting with the materials.

A large, spectacular quartz crystal cluster specimen from Arkansas, donated by John and Cheryl Anderson, welcomes visitors at the museum’s entrance and sets the tone for exceptional specimens throughout the museum. Another great specimen is a whole amethyst geode cathedral displayed to open and close, to demonstrate how these rarities are found in nature and what secret mineral world they hide inside.

Another very exciting part of the museum will take place in the lower level with the expansive laboratories of the ANGMM, where gemologists and mineral collectors will be able to access the latest identification instruments, including the most important Raman spectroscopy and X-ray diffraction instruments. The UA has also created an amazing online database, the RRUFF™ Project, for identifying minerals on Earth and other planets. Another very exciting prospect is the offering of a four-year Geoscience degree, with emphasis on gem science, the first in the United States. Although geology and mineralogy is taught at universities, gemology’s in-depth study and diplomas are only available through gemological associations worldwide.

The ANGMM aspires to be the anchor and global focal point for gem and mineral collectors, jewelry professionals, and gem enthusiasts who come into Tucson for the worldwide famous gem and mineral shows held annually in late January through mid-February, and for tourists, rockhounds, artists, and scientists who come year-round into town.

The ANGMM is located at 115 N. Church Ave in Tucson, about a 15- minute walk from the Tucson Convention Center. Currently the museum is open Monday through Friday 10 AM to 4 PM with last tickets sold at 3pm. Admission is $15 for adults, $10 for seniors, and $5 for children ages 4-12. Please note that parking in the heart of downtown Tucson is very limited. There is an underground parking garage behind the museum, and other parking garage options nearby, but everything fills up fast during gem show time. Visit the museum’s website at www.gemandmineralmuseum.arizona.edu or call at 520. 621-7433.

Helen Serras-Herman, a 2003 National Lapidary Hall of Fame inductee, is an acclaimed gem sculptor with over 39 years of experience in unique gem sculpture and jewelry art. See her work at www.gemartcenter.com and her business Facebook page at Gem Art Center/Helen Serras-Herman.