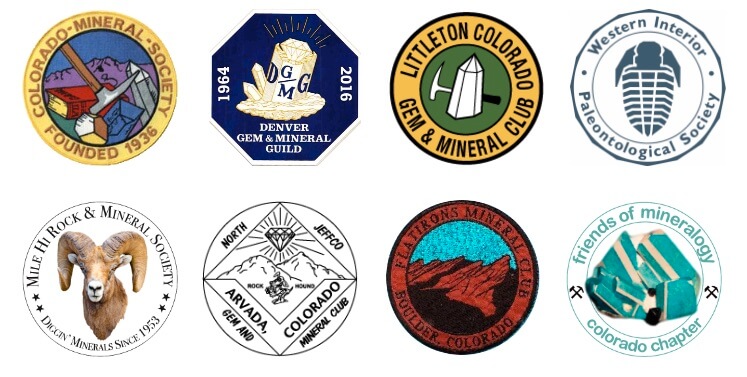 The Denver Gem & Mineral Showcase, with eleven shows open September 8-17 for dazzling and inspiring awe (and for spending gobs of cash) is on target to be one of the best in years.

What’s new? There will be a new fine mineral show at the National Western Complex, called simply the Denver Mineral Show.

What’s changing? The longstanding Colorado Mineral & Fossil Show has changed ownership and will be at a new location. Welcome aboard new owner, Sandra Gonzales; and a heartfelt, sad goodbye to Marty Zinn and his great staff (Regina, Rose and Laura). CMFS will no longer be at the Radisson on 48th and Bannock, but is moving to the Crowne Plaza Hotel at 15500 E. 40th Ave — 11 miles east on I-70 and a 22-minute drive.

What’s not to miss? The original show, the Denver Gem & Mineral Show at the Denver Mart, 451 E. 58th Ave. — known to some as the “Main Event” — is celebrating its 50th Anniversary this year with an apt theme of “Gold and Silver”!

The Denver Showcase is the second largest multi-show event of its kind in the U.S., second only to the 40-show Tucson Gem, Mineral & Fossil Showcase, which is held over a 2½ week period in January and February each year. In fact, if gem shows or showcases are rated in size by their total number of vendors, the Denver Showcase is the fourth largest in the world: Tucson has 4,000, Munich (DE) has 2,000, Sainte-Marie-aux-Mines (FR) has 1,000, and Denver has 900.

But back to the “Main Event,” the original Denver Gem & Mineral Show — which is why I’m really writing this article in the first place. The show theme is chosen each year by the Greater Denver Area Gem & Mineral Council, the not-for-profit group that produces the Denver Gem & Mineral Show (more on the Council at the end of the article), is often observed by participating exhibitors and speakers, so attendees of the show this year will be learning a lot about the geology and all the different forms and unique qualities of gold and silver. Here are a few things to look for at this year’s Denver show:

Exhibits are at the heart of all “club shows” and are right in line with most clubs’ mission statements to educate. The Denver Gem & Mineral Show provides a rare opportunity for local and regional institutions, but also groups all over the country and around the world, to showcase their gem, mineral fossil collections and discuss the pieces in their exhibit with attending visitors. At the same time, exhibits provide visitors with the motivation and examples for starting, advancing, and/or ideas about how to curate their own collections.

The nearly 100 competitive and noncompetitive exhibits feature the latest mineral and fossil finds from around the world as well as world-class specimens reflecting the show theme. Competitors vie for awards honoring the Best of Show in a number of categories, including:

Among these coveted awards, the Prospector, Junior Prospector, and Club Prospector trophies are awarded to the best personally collected specimens found during the prior twelve months. The prestigious Pearl Trophy is awarded to the best specimen entered into a special competition named for Richard Pearl, noted author of Colorado Gem Trails and Mineral Guide, among many other mineral books.

Expert speakers offer talks and lectures on a variety of topics and are usually centered on the show theme. Audiences are treated to geologic histories, travel journals, collecting stories, and technical perspectives, which provide back-stories and cultural context to collecting and collections. The intimate setting provides ample opportunity for Q&A sessions following talks with the invited field of experts and local luminaries. The seminar schedule is included in the show admission fee, and seating is available on a first-come-first-served basis. The list of speakers at the Denver Show have not yet been announced (at publishing of this Directory), but follow the show’s Facebook Page for updates of Special Exhibits and Speakers. https://www.facebook.com/denvershow.org/

The Denver area is home to an enthusiastic community of collectors many of whom are members of one (or more) of eight local gem, mineral and fossil clubs. These clubs make up the not-for-profit Greater Denver Area Gem & Mineral Council, which, in turn, puts on the annual Denver Gem & Mineral Show. Each club variously brings speakers to the area, offers children’s programs, and hosts field trips, symposia, shows, auctions and social events. Many club events are open to the public, and should you decide to join a club, fees are modest.

The eight seals in the photo represent the eight clubs that make up the Greater Denver Area Gem & Mineral Council. Go to www.denvershow.org/wp/clubs/, where you can link to any of the clubs’ websites.