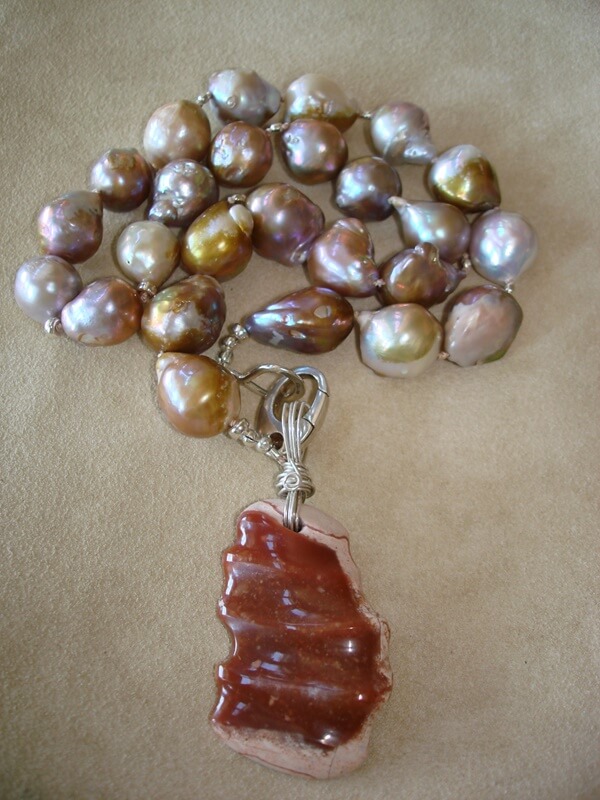 After all the years of accumulating gems, I am always excited to carve gem materials that I have not used before, especially one that I have self collected. I rarely have the chance to go rockhounding, so when the opportunity came up in Greece, it was a welcomed good fortune. And if it wasn’t for the circumstances that you will read below, I may have not considered Flint to be part of my artistic palette.

During our 2009 trip to Greece we spent two weeks on the island of Kefalonia (also spelled Cephalonia), located off the west coast of Greece in the Ionian Sea. The island is part of a chain of 7 islands known as the Ionian Islands, of which Corfu to the north may be the most famous and cosmopolitan of all. Kefalonia can be reached by air from Athens in less than an hour, or traveling by car and via ferry boat from the mainland (about 4 hours drive from Athens and 1 ½ on the boat). In contrast to the well known Cyclades Islands in the Aegean Sea with their stark natural beauty, white-washed houses and bright blue church domes, the Ionian Islands are very green, with beautiful idyllic beaches, mountains reaching down to the sea, vineyards and olive groves. The houses are built in the neo-classical style with bright red tile roofs, reflecting the Venetian rule from 1194 to 1797.

Kefalonia is the largest of the Ionian Islands with 688 square kilometers, and a population of about 33,000.  One definitely needs a car to get around and see all of the sites. It is the bucolic island of Kefalonia made center-stage in the 1994 book "Captain Corelli's Mandolin" by Louis de Berniere, set during the Italian and German occupation of World War II, and made famous in the subsequent 2001 movie filmed on location starring Nicolas Cage and Penélope Cruz.

The town of Argostoli is the capital and main port of the island since 1757, and is almost completely rebuilt after the catastrophic earthquake of 1953. Only 3.5 miles away from the center of town, up on a rocky hill close to 1,000 feet elevation, and offering a breathtaking view of the town and its bay, is the picturesque village of Davgata. There, the remarkable Museum of Natural History of Cephalonia & Ithaca is located. Arriving at the museum on an early afternoon on a late summer day during our 2009 trip, my husband and I were the only visitors. July and August is prime time for visiting the island with the best weather for swimming and when most of the cultural events and festivals take place. However September, when we prefer to visit, is still beautiful with fewer tourists and less crowded beaches and restaurants.

The Museum of Natural History of Cephalonia & Ithaca has some incredible displays of rocks, minerals, sands, shells, trees and plants of the island. Among them, we saw several specimens of Kefalonian Flint, but at the time we did not think much about it. Later I talked with my friend Nikos Garbis- a wonderful local goldsmith, who showed me some rock specimens a German tourist had found. They were small broken off pieces that had good orange color and translucency, and our thoughts went toward Quartz or Jasper.

Flint - what the material proved to be- is a cryptocrystalline variety (very small compact crystals) of Quartz. Flint was used in ancient times for tools because the nodules would flake off easily by knapping, and for engraved seals. It usually occurs as nodules and masses, often with a rough thin white cover layer, and has a glassy or waxy appearance. My friend knew the town in the northern part of the island where the specimens were found, but not the exact location. All he said was “it is near the sea”!!!

After rock-hounding for a while under the hot sun near the beaches, where we only found large white pebbles, we were ready to give it up. The elusive rocks could have been anywhere!! Driving back, I looked on the right hand side of the road, away from the beach, and there seemed to be a small outcrop of rocks among an olive grove and free-roaming goats. We stopped to give that place a try. Within minutes we started finding pieces of flint, some better than others, some encrusted with a white coating, some complete nodules. Keeping only the best specimens, there was still plenty enough for us and to share with our friends.

Later I talked with the curator of the Museum of Natural History of Kefalonia & Ithaca, Mrs. Niki Katsouni, who confirmed the existence of flint on the island. The flint’s historical significance has also been revealed by recent archeological research on the island that has uncovered several Paleolithic finds of flint.

Back at the museum, we looked with new appreciation at all the flint specimens and photographed them. The colors of Kefalonian Flint range from cream to pale yellow to reds and orange, bringing to mind petrified wood. Many of our specimens are bright orange-red, some are very translucent, and some are opaque.

We were thrilled to have been able to locate this gem material. Flint is found in many places in the world, and possibly in other places in Greece, but material from the island of Kefalonia is not known to be collected today or utilized in contemporary lapidary or in artistic jewelry. When I came back home to my studio, I carved some of those rough stones, and they became beautiful, unique gems, similar to cornelian. Then I designed and created some artistic jewelry pieces with centerpiece pendants carved in the Kefalonian Flint.

During my 30-year plus career in carving gems and creating unique gem sculptures and jewelry, I am always excited to use a new material, especially one that has historic roots. As with all my artwork, I want them to tell a story. This Kefalonian Flint Jewelry Collection tells our rock-hounding story and our warm friendships with other artists on the island. It also pays homage to my paternal grandfather’s island of birth, the island that I have been visiting since I was very young, and now travel from the faraway high deserts of southern Arizona to visit.