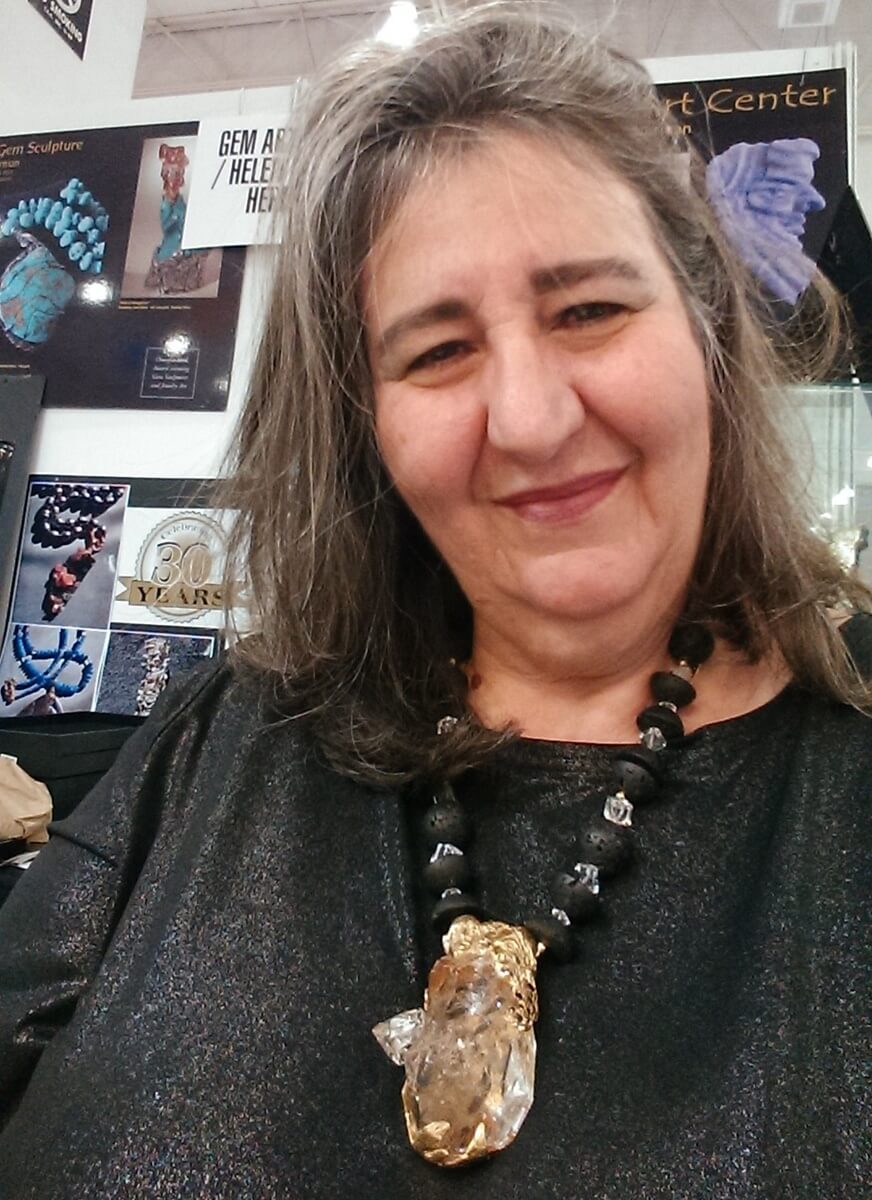 I honestly cannot recall when I first met Helen Serras-Herman. It seems like she’s been writing for Xpo Press from the beginning, which would be 18 years ago, but, as it turns out, the first article that she wrote for us (about the rare pink mineral, Astorite) was published in the Denver EZ-Guide in September 2013. Since then, Helen has contributed an average of four articles per year that we’ve published in our EZ-Guides, artfully crafting her expertise in the areas of gemology, gem-cutting, lapidary arts, and her copious travels to significant gem-and-mineral-related destinations, whether mines, museums, galleries, or symposiums throughout the U.S. and around the world.

Both you (our readers) and we (Xpo Press) are very fortunate to have Helen’s expertise, knowledge, and insights captured in print, as she is one of the most qualified, well-versed, seasoned, and internationally esteemed (yet wholeheartedly modest, down to earth, and personable) experts that today’s gemstone sector possesses.

In this article, I’m taking the opportunity to introduce you to Helen’s background and accomplishments in the world of gemstone artistry. However, these accolades pale in comparison to the warm personality and capacity for deep friendship that Helen and her husband, Andrew Herman, have brought to all of us who’ve been fortunate enough to know them. And yet, the accolades, accomplishments, and contributions that Helen has made to the gem and mineral cosmos is immense. I’m pleased to boast a bit in this piece about Ms. Helen Serras-Herman, gem artist extraordinaire.

Helen was born in New York City in 1956 to Greek immigrant parents who came to America in 1946. By age five, Helen and her family moved to their homeland of Athens, Greece. There, opportunities for study unfolded as she pursued drawing and painting, and History of Art in Athens (1973-76) with the late painter Vrasidas Vlahopoulos.

Helen earned a master’s degree (MFA) in Sculpture from the prestigious Hochschuele Der Kuenste (University of Arts) in West Berlin, Germany, following six years of study with professors Hans Nagel and Harro Jacob (1976-1983). During her last two years (1981-1983) at the school, Helen gained enormous experience in molds and casts while working as tutor of the Plaster Workshop in the Sculpture Division.

Returning to Greece in 1983, she worked in bronze and mixed media, becoming a member of the Greek Chamber of Arts/Sculpture Division, and the Sculptors Association. She worked there as a professional sculptor with two solo exhibitions and participated in numerous group sculpture exhibitions until 1988.

Helen served a long apprenticeship (1984-1988) while mastering her sculptural glyptographic pieces with English Master Nik Kielty Lambrinides, the last master of the English School and the pupil and, in 1976, successor of Cecil Thomas. Lambrinides realized his dream of creating a gem carving and gemology school when he relocated to Greece in 1980.

Helen’s artistic future unfolded with her discovery of the world of carved gemstones during her three-year course on glyptography and glyptology at the Glyptography Center in Athens, founded by Lambrinides in 1983. From 1986-1988 Helen also taught drawing, glyptography, glyptology, and gemology at the Municipal School of Glyptography & Jewelry in Volos, Greece, and the Lapidary School, near Hania, Crete.

In 1988, Helen returned to the U.S., moving to the Washington, D.C. metro area (Maryland). She established her studio, the Glyptography Center (renamed the Gem Art Center in 2000). Since then, Helen has devoted herself to the art and science of gem sculpture. In 2005, Helen and husband Andrew, a retired aeronautical electrical engineer, lapidary, and GIA graduate gemologist moved to Rio Rico, Ariz., where she currently resides, has established her studio, and continues to create.

Helen has a gifted and keen eye for aesthetics everywhere she goes, earning multiple awards over the years for her distinctive carved gemstones and jewelry. Her work is intentionally timeless yet gives voice to a stylish modern jewelry collector. Take a closer look to examine the subtle nuanced way she carves each gemstone; no two items are alike, and once sold, there will never be another one like it.

Whether one is admiring her carved gemstones, original jewelry art, or freestanding gem sculptures, each piece displays the art and expertise of a master artist. Her iconic ‘wearable’ sculptures explore the relationship between fine art and personal adornment. Many of these unique works were bespoke pieces.

Helen’s vibrant contemporary organic jewelry features unusual carved gems, often intertwined with natural gemstone beads and pearls. The selection of contemporary organic compositions, her workmanship quality, and her ability to blend the mineral world with the art world are qualities for which her work is recognized. Her palette features a rich assortment of precious gemstones including fancy-color sapphire and garnet, tanzanite, diamond, red spinel, opal, tourmaline and more, all mounted in 14K or 18K gold and sterling silver.

Her sculptural artwork and artistic jewelry collections always “tell a story” inspired by her world travels to mines and ancient archaeological sites and are influenced by her southwest environment and the ancient Greek mythology. Figures and faces often take symbolic shape, examining imposing portraiture and mythological characters, such as gods and nymphs. Yet each of her creations are always one-of-a-kind, bearing her signature and accompanied by a certificate of authenticity.

Helen’s company, the Gem Art Center (GAC), was established in 1988. GAC participates in a number of gem and mineral shows — as well as art and craft shows — in Arizona, New Mexico, Texas, and occasionally Maryland. GAC is recognized for its attractive displays, quality and variety of merchandise, knowledge, and customer service, and exhibits Helen’s jewelry, unique carved gemstones in Australian opals and drusy gemstones, as well as custom-cut faceted gemstones, including Oregon sunstone and Montana sapphires. GAC is also known for exhibiting a variety of high-quality lapidary slabs for lapidaries, collectors and gem enthusiasts. Additionally, Helen’s original work has appeared in select galleries nationwide and is currently represented by Art Gallery H in Tubac, Ariz., and Gordon Aatlo Designs in San Carlos, Calif.

Contributions in Media and as Speaker and Lecturer

Helen is often consulted about her thoughts and views by trade journalists and authors, and her work has been published in over 300 magazine articles, featured on front covers of industry periodicals, discussed in many books, and she’s been personally interviewed on local radio and TV channels.

She is a sought-after speaker at shows, expos, conferences, and various events. Her topics are wide-ranging and engrossing to her audience. Full of real-life anecdotes from her professional career and highlighted with images from her personal collection. She’s also a noted lecturer and has given over 170 lectures nationwide to sixty societies and associations on a variety of subjects.

• Recipient of Each One Teach One Award from Eastern Federation of Mineralogical & Lapidary Societies, 1994.

• Inductee into the National Lapidary Hall of Fame, 2003