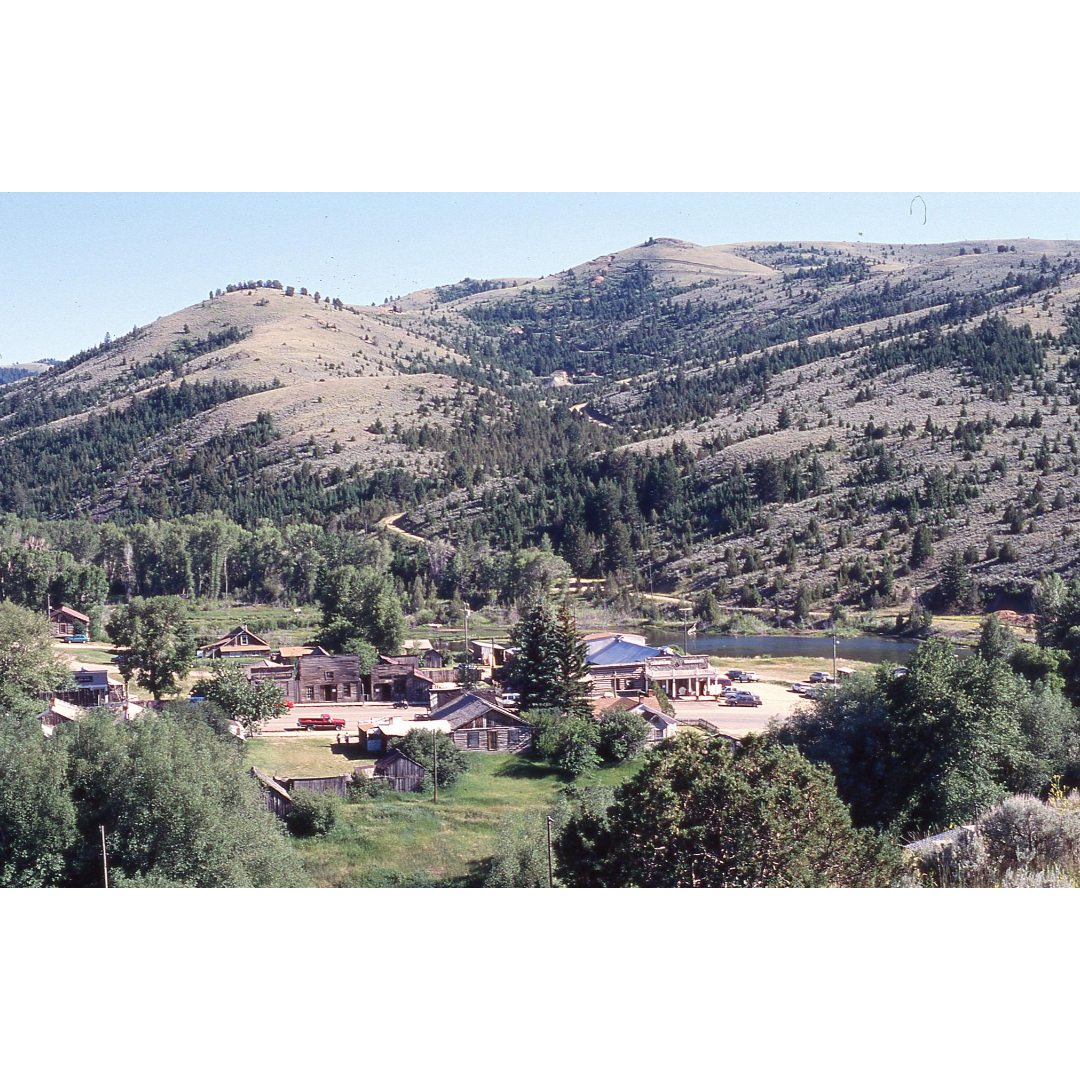 The very picturesque and historic towns of Virginia City, and its sister town Nevada City one mile apart, are nestled along the Alder Gulch stream in southwestern Montana, 76 miles east of Butte. They were the epicenter of the one of the richest gold strikes in the Rocky Mountains.

In the spring of 1863, a group of six prospectors set out from Bannack on an expedition. After they were captured by the Crow Indians en route to the Yellowstone gold fields, they were released and told not to continue down the river. On their return way to Bannack on May 26, 1863, they camped for the night at Alder Gulch. One of those miners, named Bill Fairweather, dug the dirt and told miner Henry Edgar (who named Alder Creek), to wash a pan to see if they could find enough gold to get money to buy tobacco in town. As luck had it, they discovered one of the richest gold placer mining areas in Montana’s history.

Although the prospectors tried to keep their discovery a secret, word spread out, and Virginia City sprang almost overnight. Hard-rock gold ore was also discovered about eight miles above Virginia City. By the fall of 1863, about 10,000 prospectors flooded the gulch. Virginia City was established in 1864, and approximately 35,000 people lived in her companion towns. It is estimated that over 2.5 million troy ounces of gold were mined in that gulch between 1863 and 1889, translating into 40 billion dollars in today’s prices.

The Montana Territory was created on May 26, 1864, just one year to the day after the discovery of gold in Alder Gulch. Virginia City served as the new Territorial Capitol from 1865 until 1875, when the capital was moved to Helena. Miners, merchants, outlaws, saloons, blacksmiths, boarding houses, and melodrama playhouses set up shop in Virginia City. In the late 1860’s, placer mines were consolidated, and hydraulicking began to replace shaft and drift placer operations. 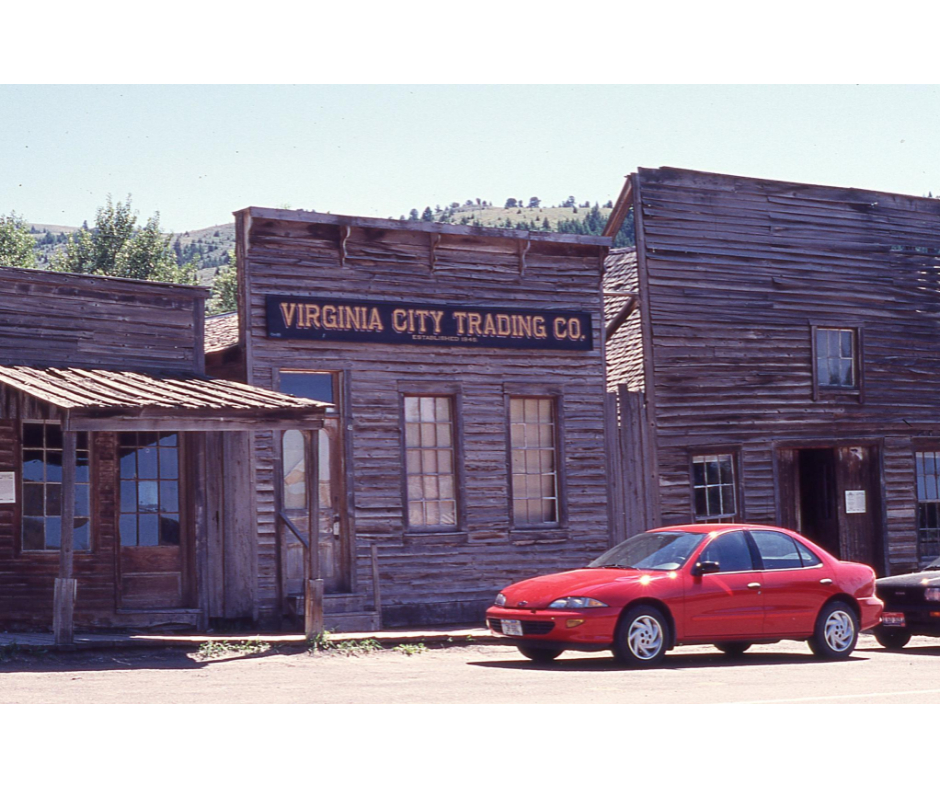 A new era of mining begun in 1897, when five huge dredges, installed by the Conrey Placer Mining Co. mined the Alder Gulch region. Dredges are floating sluice boxes, and their huge cast iron buckets, one bucket at a time, chew through the creek’s ore. The dredges removed 150-200 million dollars worth of gold. But they left behind huge waste gravel piles, a totally distressed landscape. Dredging continued until the 1930’s. 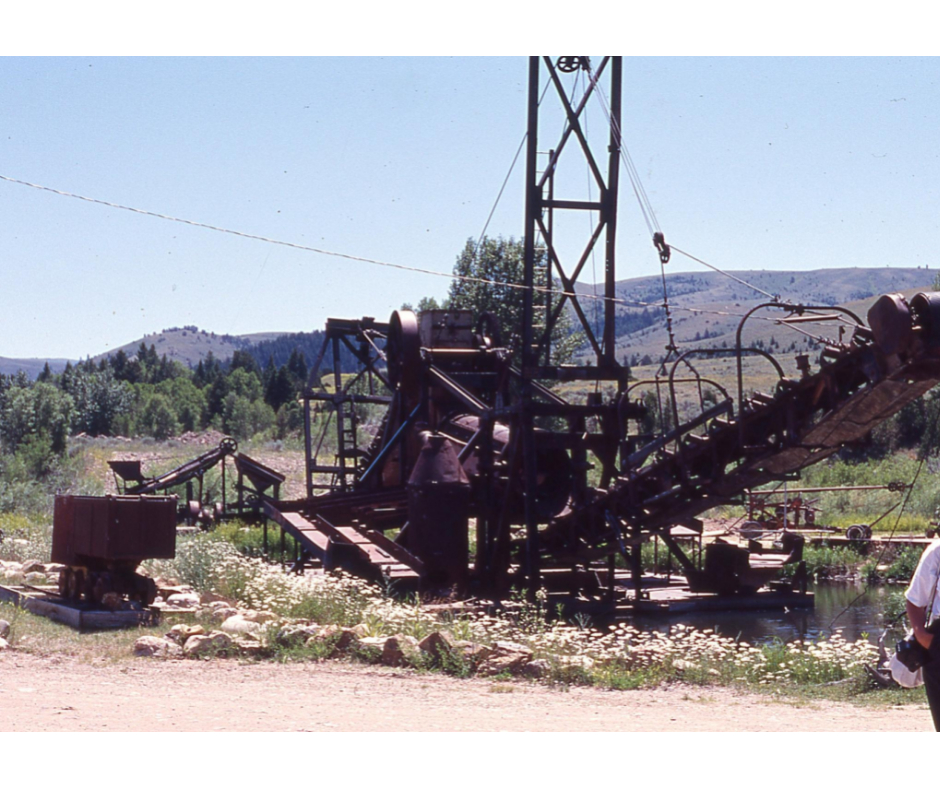 No western mining town is void of lawlessness and vigilantes history, and so is Nevada City. As early as the summer of 1863, a gang of “road agents” with Henry Plummer as sheriff and leader of the gang, committed over 100 murders and stagecoach and train robberies, stealing huge amounts of gold. Vigilantes rounded up many of them and hanged them, including Plummer who was hanged in Bannack in January 1864. Treasure hunters are still searching today for Plummer’s lost gold. Their graves are marked at the Boot Hill cemetery located above town.

Some placer mining takes place today and occasionally nuggets are found in the area’s creeks and rivers, but Virginia City is mostly a historic town. Many of the original buildings still stand, some showing Victorian architecture, while others are rustic log cabins perched on the hillsides. Virginia City and Nevada City were designated as National Historic Landmark in 1961.

In 1944, Charles and Sue Bovey came into Virginia City looking for antiques and historic relics for their Great Falls exhibit, but stayed and decided to restore the old camp and revive Virginia City’s history. They purchased and restored many of the town’s old buildings, and furnished some with period antiques from their private collection, while three quarters of the antiques are original to Virginia City and Nevada City (Marjorie Antolik, Assistant Curator, Montana Heritage Commission). In 1997 both Virginia City and Nevada City were sold to the state of Montana. Charles Bovey’s vision saved the treasured towns, which have become a great tourist destination.

Stop by the Virginia City Depot and Visitor Information Center at 413 West Wallace Street and the Charles & Sue Ford Bovey Visitor Center in Nevada City on Hwy 287, both end depots for the narrow-gauge Alder Gulch Shortline Railroad. We enjoyed the mile-and-a-half train ride, built by Charles Bovey in 1964, which connects Virginia City and Nevada City, and the 35-minute narrated tour ride on the 1941 Fire Engine around Alder Gulch and Boot Hill.

The outdoor exhibit at the Nevada City Old Town Museum & Music Hall includes one hundred buildings dating between 1863 and 1900, and houses one of the largest collections of Old West artifacts. The ghost town comes alive in the summer with 1860’s gold-rush era interpreters. 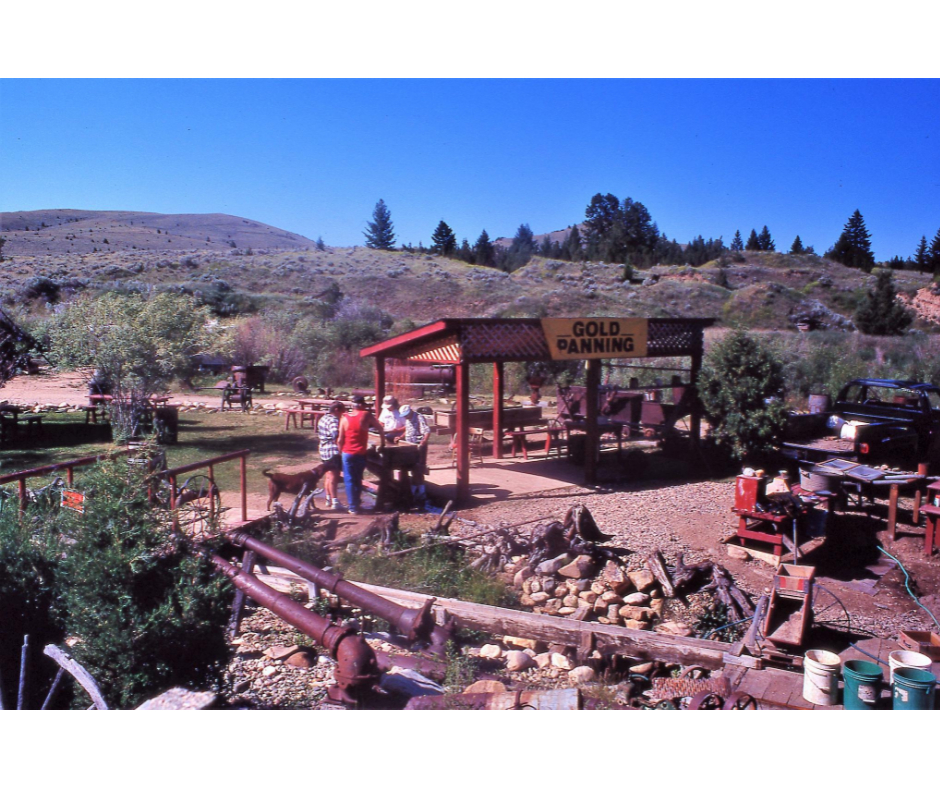 The River of Gold Mining museum is located at 1559 MT Hwy 287, 1.5 miles west of Virginia City. Mining equipment is spread around the grounds, collected from various Montana mining sites. One of the Alder Gulch dredges, the Mount Vernon dredge, built in 1937, is on display there. It is a No.2 type, donated to the museum by Mr. Harold Lynch and Mr. Joe Gray in 1985. We looked at this dredge and learned about the dredges’ history and their amazing engineering.

The museum offers outdoors gold-panning, which of course my gold-rush-fever-induced husband took advantage. He was taught how to shake the rocker with the gravel, the correct panning action, and how to “slurp” the gold into a vial. Beautiful dark red almandine garnets are also found along with gold in the gravel. Although most garnets are small, some may be large and suitable for faceting. The River of Gold Mining Museum is open Memorial Day through Labor Day, 10am to 5pm. The fee is $10 per person and includes vials for your gold and garnet finds. For more information call 406. 843. 5247.

There are a more rockhounding options for Montana’s garnets. We self-collected small garnet crystals on the shores of Ruby Reservoir, about 12 miles west of Virginia City. You can also purchase gravel buckets from Red Rock Mine & Garnet Gallery at 2040 Montana Hwy 287 (6.6 miles west from Virginia City) and screen for garnets on the premises. I spoke with Steven Cox Grimm at the mine, who said that this past year they were finding good-size garnets for faceting.  They also have gold-bearing gravel from another mine, and southern-style gold panning set-up. For current information please call 406. 842. 5760. You can also purchase a bucket and screen for garnets and pan for gold at the Alder Gulch Gold & Garnets shop at 1559 Montana Hwy 287, West Virginia City. Tel. 406. 843. 5526. 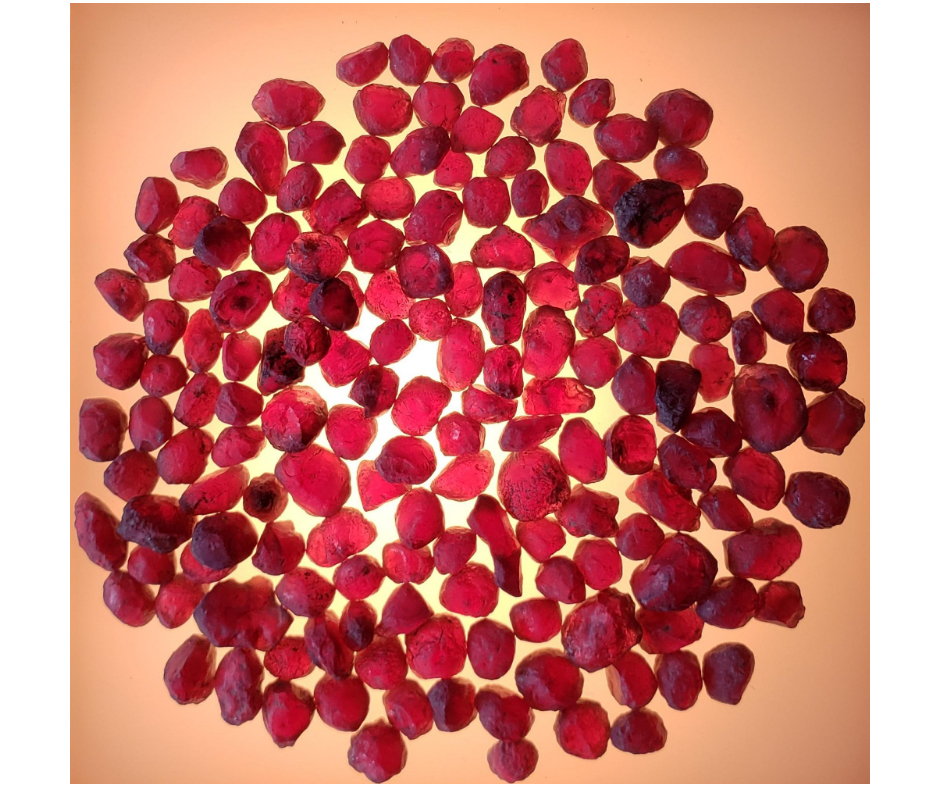 Dendritic talc is mined near Virginia City, in Madison County. It is fine-grained, creamy white-colored talc with beautiful manganese dendrite veins. The mineral talc is a hydrous silicate of magnesium. We first came across this local material while visiting Marv’s Rock Shop in Alder (now closed after Marvin’s passing).

Talc is very soft, only about 1-2 on the Mohs scale, and can be carved easily with metal tools and sandpaper. It has a soapy feel and it’s often referred to as soapstone. It achieves a nice polish, although sometimes it may be lacquered. There are talc deposits near Dillon and southwest of Ennis at Johnny Gulch (Rockhounding Montana, by Robert Feldman, 1996, The Globe Pequot Press, and Talc & Chlorite Deposits in Montana, Montana Bureau of Mines & Geology, 1979). Currently the Johnny Gulch site is called the Yellowstone Mine (www.mrdata.usgs.com ), although it seems to be closed.

Helen Serras-Herman, a 2003 National Lapidary Hall of Fame inductee, is an acclaimed gem sculptor and gemologist with over 39 years of experience in unique gem sculpture and jewelry art. See her work at www.gemartcenter.com and her business Facebook page at Gem Art Center/Helen Serras-Herman

Photo descriptions – All photos by Helen Serras-Herman and Andrew Herman

The very picturesque and historic town of Virginia City is nestled along the Alder Gulch stream in southwest Montana.

The restored in 1948 Virginia City Trading Co building, with the original 1863 Blacksmith shop (on the right) are among the many historic buildings.

The Mount Vernon dredge is on display on the grounds of the River of Gold Museum.

The River of Gold Museum offers an outdoors gold-panning experience.