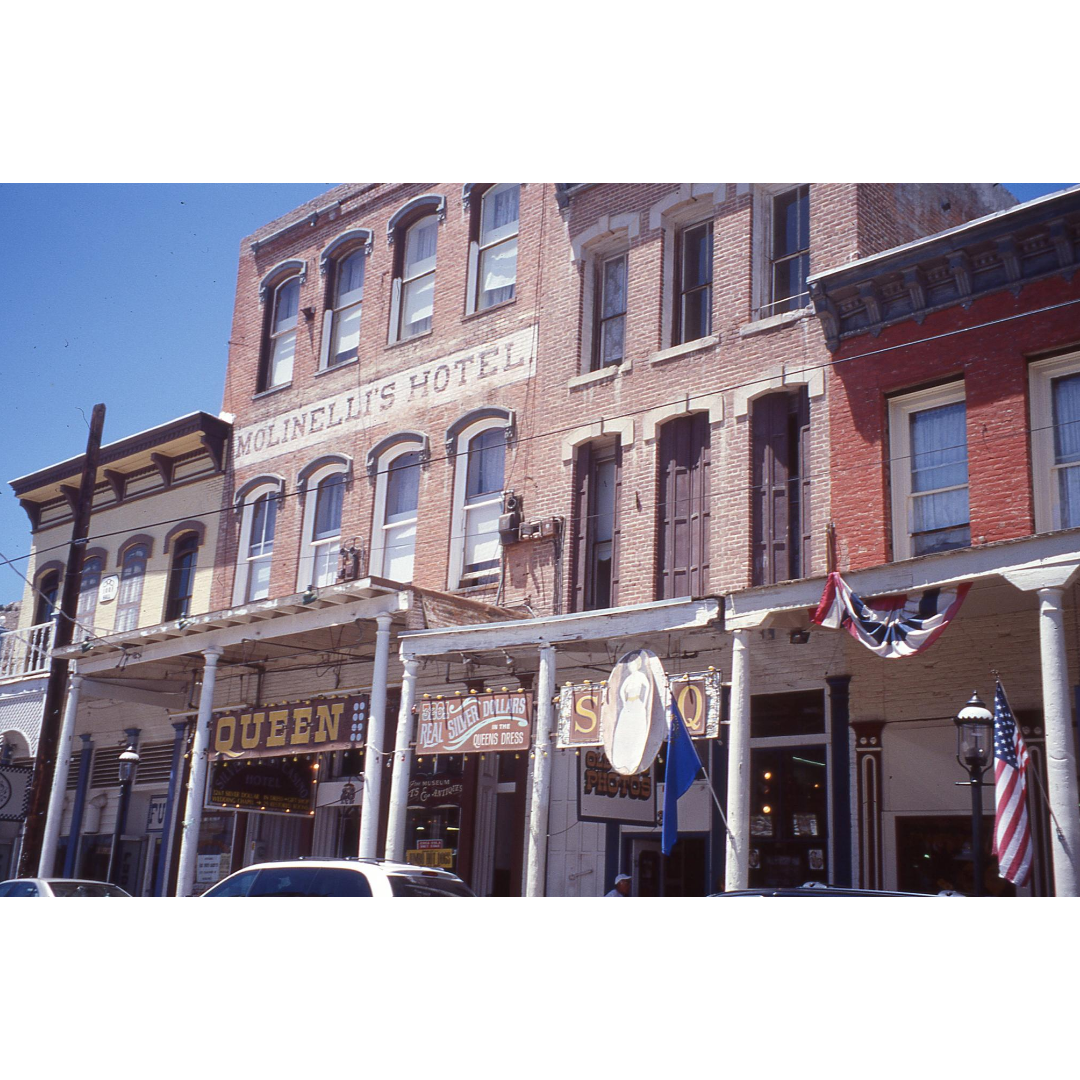 There are two historic, old west mining towns named Virginia City – one in Montana established in 1863 shortly after the major placer gold discovery in Alder Gulch, which we discussed in Part 1. The other one is in Nevada near Carson City, 26.7 miles away from Reno. Virginia City is situated at 6,250 feet elevation against the backdrop of Mount Davidson.

Virginia City, Nevada, became a boom town after the 1859 discovery of the Comstock Lode, the first major silver deposit discovery in the United States. Gold was discovered in 1850 in nearby Gold Canyon and Six Mile Canyon, by Mormon immigrants on their way to the California goldfields. But it took another nine years to reach the high-grade lode outcrops of silver and gold quartz ore.

The Comstock Lode – a lode of silver ore - became one of the greatest precious metals mining districts in the world, producing at its height over $50,000 per day, a total of 20,000.000 million tons of gold-silver ore and about $500 million in silver and another $700 million in gold.

The credit for the discovery goes to Irishmen prospectors Peter O’Riley and Patrick McLaughlin at their small placer operation, brothers Hosea and Allen Grosh, and James Finney, a native of Virginia nicknamed “Old Virginia”, in whose honor Virginia City is named. However, these early miners’ names are almost unknown, as the discovery is named after Henry Comstock (1820-1870), a Canadian who came early in the Virginia City area and took over, but sold out early (Comstock Mining & Miners, Eliot Lord, 1883, re-printed in 1959 and 1984 by Nevada Publications).

The Comstock Lode’s fortunes spurred a mining rush and growth for Virginia City, Gold Hill, the whole state of Nevada, even contributed to San Francisco’s wealth. The Consolidated Virginia, Best & Belcher, Crown Point, and Orphir mines were the big producers among over 90 operating mines. The Big Bonanza ore body- described to be as high and as long as a football field - was discovered in early 1873 but lasted only until 1879. The Big Four Silver Kings, as the four Irishmen were known, were John Mackay, James Fair, James Flood and William O’Brien.

The Comstock Lode’s difficult mining near the fault zone required ingenuity and new mining methods. The square-set timbering was invented on the Comstock in 1860 by Philipp Deidesheimer – a German mining engineer from California. Heavy timber “cubes” support the underground mining tunnels and shafts to prevent the ground from caving. These Ponderosa timbers came from the Lake Tahoe region. The Comstock Lode is called the “tomb of Lake Tahoe’s forests”. There are 750 miles of underground workings - tunnels, shafts, stopes, winzes, and inclines.

The other problem was pumping large amount of hot water (up to 170 degrees Fahrenheit) encountered as the mining went deep into the earth. The solution was the four-mile Sutro Tunnel constructed by Adolph Sutro, completed in 1878, which brought automatic air circulation through the shafts at different elevations.

The 1870 and 1880 census shows a population of around 10,000 for each of those years, but a big ore strike and the Great Fire between those years (Liza McIlwee, VCTC) reduced earlier population numbers reported between 20,000 and 30,000 with about 7,000 miners.  There were six schools, seven churches, four newspapers, four banks, eleven cemeteries, 100 saloons, twenty hotels, twenty five lodges, many grocery and clothing stores, and the famous 1860’s Piper’s Opera House open today as a museum and performing arts center. But, as the mine production declined after 1878, so did the population.

In 1961, Virginia City was declared a National Historic Landmark. We took a great tour around town on a tractor wagon, and then visited several old saloons steeped in history and miner’s tales. Among the 1876 original saloons is the Delta Saloon. On exhibit is the Suicide Table, a true relic as three previous owners committed suicide there due to heavy losses over this table. The Big Four Silver Kings played here (www.deltasaloon.com).

Another famous saloon is the Silver Queen inside the Silver Queen Hotel, built in 1860. At the saloon with the tallest bar built in 1876, an enormous picture of Lucky Lady – or Silver Queen - hangs on the wall. The 15-feet tall portrait features a woman’s dress made entirely of 3,261 Morgan silver dollars, minted in Carson City (read about the Mint in my article The Carson City State Nevada Museum in Rock & Gem’s June 2021). The number of silver dollar represents the depth of the Combination Mine shaft. There are also twenty eight $20 gold pieces (www.silverqueenhotel.net ).

The Ponderosa Mine Saloon & Underground Mine is located at 106 South C Street. The 40-minute guided tour takes visitors 317 feet deep in the mountain, 52 feet below the surface, to see the underground tunnels, stopes and shafts. Our guide (the late John Bailey) shared that only $438 in silver was ever found in the 1800’s. About a century later, the saloon’s owners realized their saloon was only a short way to the underground Best and Belcher Mine. They dug a tunnel, connected the mine to the saloon, and started offering tours of the forgotten mine. The saloon’s 1864 building housed the Bank of California until 1935, and was turned into a saloon in 1950. 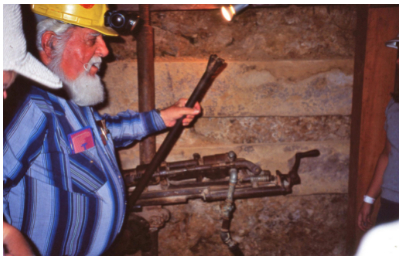 All mine workings are stabilized, with over 300 pieces of mining equipment on display. The guide explained the square-set timbering system. The Ponderosa Mine Saloon and their Underground Mine Tours is open every day, year round. Guided tours run from 12pm to 5pm ( www.visitvirginiacitynv.com/mines-mining-history/) Tel. 775. 847. 7210

The Chollar Mine was first staked in 1859 by a group of investors headed by Billy Chollar, and was one of the leading producers on the Comstock Lode with over $17 million in gold and silver mined. 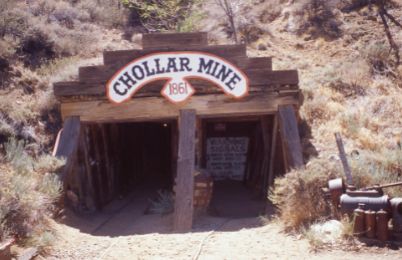 The wonderful guided underground tour at the Chollar Mine lasts about 50 minutes and takes visitors to the 400-level down an old mine tunnel. Old mining equipment, pneumatic rock drills, silver ore, and square-set timbering are some of the mine’s highlights. The guide demonstrates single-jack drilling, and shares stories of the hardships miners had to endure. Miners worked eight-hour shifts, most at ten-minute intervals due to the extreme heat, and earned $4 per day –the highest paid miners in the world. At the end of the tour, the guide turns the lights out for a few moments and lights up a candle for visitors to experience the mine’s darkness, and how the miners worked.

The Combination Shaft - known so as the owners of the Chollar-Potosi, Hale & Corcross, and Savage mines combined their efforts- is located outside. The vertical shaft goes down 3,262 feet, the deepest shaft ever sunk on the Comstock, with the most profitable silver ore found at the 2,000 to 3,000 feet levels.

The Way It Was Museum is a great place to soak up the local history. The museum displays the most comprehensive collection of Comstock Mining artifacts, rare photos, and maps of the “Bonanza” period. An impressive large model shows hundreds of miles of underground mine network workings. Two assay furnaces are on display, used in the assay process to melt the gold, silver and other metals in the ore sample. A wonderful double cabinet hosts a great variety of local minerals. 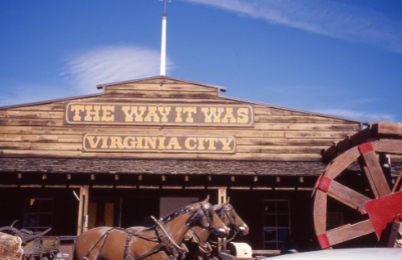 The Way it Was Museum is located at 113 N C Street. It is open year round 10:30am to 4:30pm, and features a continuous-running 16-minute video (www.thewayitwasmuseum.com).

In the center of town, a beautiful memorial - an obelisk with natural stones - has plaques on each side commemorating the Comstock Lode and Philipp Deidesheimer, the square-set timbering inventor.

The Virginia City Visitor Center (www.visitvirginiacitynv.com) at 86 S C Street is a great place to get maps and information about the sites and the seventeen museums. My sincere thanks go to Tourism Assistant Liza McIlwee for her help.

Helen Serras-Herman, a 2003 National Lapidary Hall of Fame inductee, is an acclaimed gem sculptor and gemologist with over 39 years of experience in unique gem sculpture and jewelry art. See her work at www.gemartcenter.com and her business Facebook page at Gem Art Center/Helen Serras-Herman

Our guide, the late John Bailey, at the Ponderosa Mine, shows the German-made pneumatic drill and square drill bit.

We took the wonderful guided underground tour at the Chollar Mine, first staked in 1859.

5. The Way it Was Museum

The Way It Was Museum is a great place to soak up the local history.

In the center of town, a beautiful memorial - an obelisk with natural stones - has plaques on each side commemorating the Comstock Lode.