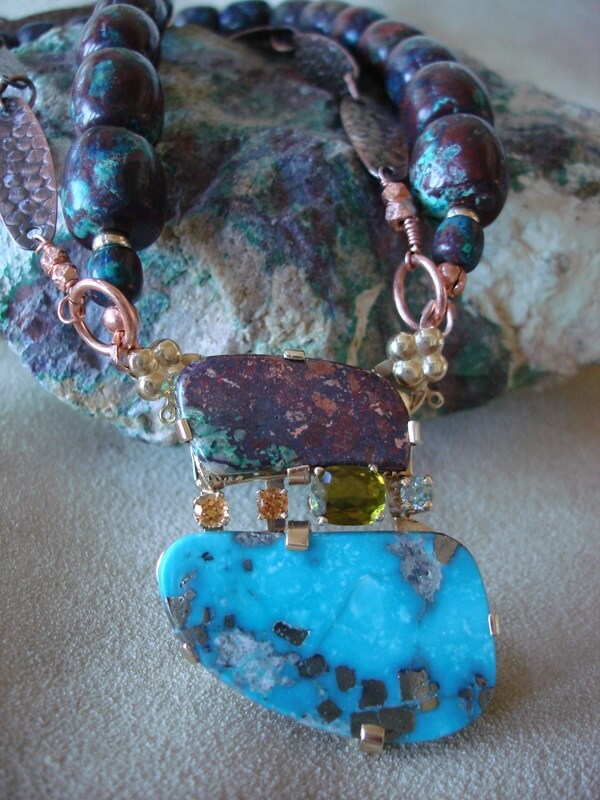 Arizona is a state rich in gemstone deposits of turquoise, gem chrysocolla in quartz (gem silica), garnets, peridot, azurite, malachite, amethyst, fire agate and gold. There are, though, some lesser known, unusual gemmy materials that have caught my attention in recent years.

Blue opal, “pink desert silica,” cuprite with malachite and copper, alabaster onyx, and banded fluorite are some of these eccentric gem treasures. When cut, they possess the necessary requirements to be called a gem: rarity, beauty and durability. Their market availability is limited, the color combinations are beautiful, they are rather easy to cut and polish, and they have a good wearability when they become part of jewelry.

Personally, I love using gem materials that are rare and uncommon, that have a mining story behind them, that are attractive with cool patterns and design elements, and may be incorporated into one-of-a-kind art jewelry.

Blue opal from Arizona has been mined for nearly half a century. Most of this material does not have play-of-color, but it displays a beautiful deep blue body color, often occurring in veins that penetrate the rhyolite host rock, which shows red and tan scenic bands. Rare, high-grade Arizona blue opal does display play-of-color, with reds, pinks and greens being the most prominent colors. A GIA report from back in the early mining days confirmed that the material is opal.

There is a wide range of materials classified as opals that may or may not show any spectral color flashes, the optical phenomenon of play-of-color. These opals are usually referred to as “common opals” in contrast to their “precious” cousins, the black or white opals, boulder and matrix opals, and fire opals. But, what these opals have is a striking body color — blue, pink, yellow, green, or stark white — and may also show bands, stripes or scenic patterns. I, along with several other people in the trade, think that their appealing beauty should take them out of the “common” class and place them straight into the “exotic, stunning, rare and unusual” stratosphere!

The blue color of the Arizona blue opal is similar to “aero blue” or “baby blue eyes blue,” rather than electric blue, and matches closely the 2016 Pantone’s Color-of-the-Year, the “Serenity” blue. The hardness of blue opal depends on the purity of the inclusions. It ranges from 5.5 to 6.5 on the Mohs scale, high enough to allow for superior polish without being too time-consuming to cut. Material is mostly opaque.

Blue Opal has been known in Arizona since 1969, when prospectors Cheri Saunders and her husband, Jim, discovered it at the Jay-R Mine in the Atascosa Mountains of Santa Cruz County, which are as far as the crow flies from my studio. The blue opal was originally mined on six claims, which were part of the Coronado National Forest, at nearly 4,000 feet elevation. After her husband died in 1973, Saunders worked the mine and created jewelry from the material she recovered (“A Rocks to Riches Saga,” Sam Negri, Arizona Highways, September 1996). Following Saunders’ recent failing health, a sell-out of all her Arizona blue opal took place at the Blue Opal Art Gallery in Whetstone, near Sierra Vista, and several of us were invited to go. Beautiful scenic specimens and some cut stones found new homes.

Arizona blue opal is also reported in Allan W. Eckert’s book, The World of Opals. Eckert also lists the Arizona Blue Fire Opal Mine, located adjacent to the Jay-R, as a source of the material.

A recent claim in Santa Cruz County is currently being mined by the Southern Skies Opal Company, producing blue opal. Some of the material displays play-of-color, and some features attractive pink bands.

The Arizona blue opal material is similar to blue opal from Oregon. The blue opal there comes from the Owyhee Mountains in the eastern part of the state, near the Idaho border. It shows no play-of-color, and its color is a bright robin-egg blue. This opal is usually semi-translucent to opaque. On rare occasions, it may show play-of-color, with red and green pin fire. Its hardness is 5.5-6.5.

Blue opal from Arizona has a very different look from its more famed cousin, the Peruvian blue opal, whose color ranges from a bright neon-blue variety to sky blue, turquoise blue and greenish-blue, often along with white or cream bands. Sometimes there are also beautiful delicate dendritic patterns created by fern-like black inclusions, and it is usually translucent to opaque.

In 2012, we purchased some very attractive material, which had not been officially tested but closely resembled pink opal from Peru. The material was reportedly from Graham County in Arizona, where some avid mineral collectors stumbled upon it while hunting. The rough material showed a conglomerate pattern and an unusual cell-like structure with varying shades of pink, in combination with quartz veins.

The material produced some beautiful slabs. When I carved a few pieces of this material I then realized that it was extremely hard and compact, and that it probably was not opal. It took an easy and great polish with cerium oxide. The colors range from warm peach to bacon red, and I deliberately featured the intriguing conglomerate pattern in my designs.

In the meantime, this material was tested and it showed an R.I. of 1.54, making it a type of pink chalcedony rather than pink opal. Hence, I gave it a more suitable name, “pink desert silica.”

Cuprite with Malachite / Copper from the Morenci Mine

Cuprite is an oxide mineral Cu2O and a minor ore of copper. It is a secondary mineral which forms in the oxidized zone of copper sulfide deposits, and it frequently occurs in association with native copper, azurite, malachite, chrysocolla, tenorite, shattukite and turquoise, and a variety of oxide minerals. Very rarely cuprite crystals are large enough to be faceted.

Cuprite often penetrates complex copper ores and the specimens may contain a number of these minerals, in various combinations. The blood-red cuprite together with malachite and some azurite and the added copper inclusions, along with some white quartzite that brings the hardness up, from the Morenci Mine in Greenlee County, makes very unique cabs, carvings and beads, as also does native copper in quartzite. A fellow local lapidary, Wolfgang Mueller, well recognized for his cabochons and especially eggs and spheres, also often uses these native Arizona materials. (http://diwolf.com/)

Complex copper ore has been mined at most Arizona copper mines, such as the Morenci Mine near Clifton, the Globe/Miami area mines, Bagdat, Ajo, Jerome, Kingman and Tombstone.

The cuprite material from the Morenci Mine is similar in chemical composition to the Sonora chrysocolla, but it shows the added copper inclusions that the Sonora material does not have.

Sonora chrysocolla is also known as Sonora Sunset or Sonora Sunrise chrysocolla, or chrysocolla cuprite. The natural Sonora chrysocolla is a copper-based rock composed of blue or green chrysocolla and red cuprite. It may also contain the orange-red chalcotricite, blue brochantite, and black veins of iron or tenorite. It has been mined since 2006 at the Milpillas Mine that has produced stunning azurite-malachite crystals — the copper mine near the town of Cuitaca in Sonora, Mexico, very near the famous copper mine in Cananea. It is reported, however, that since 2011 all copper ore at the Milpillas mine has been exhausted.

White alabaster onyx is found in Arizona at Stockton Hill, near Kingman. The mine is known as Kingman Onyx Quarry, off Stockton Hill Road, east of the Cerbat Mountains in Mohave County. The material is also known as “Kingman white onyx.”

Alabaster onyx is a form of calcite, the limestone onyx variety. It is a lightly-colored delicately banded variety, usually of a whitish-yellowish color with swirling bands of cream and brown. It is compact and highly translucent and, in some cases, has small pockets of drusy material, creating amazing stalagmitic patterns. Its hardness is around 3 Mohs, but it takes an easy and good polish.

Alabaster onyx should not be confused with true onyx, which is a quartz variety, with 6.5 Mohs. Although geologically it is described either as a compact banded travertine, or a stalagmitic limestone, the term “alabaster onyx” is used by archaeologists referencing the ancient material that vases and objects were made of. It is also known as Egyptian alabaster or Oriental alabaster.

Fluorite is found in several locations in Arizona and in Mohave County. Fabulous mineral specimens of purple or green fluorite are mined at the Homestake Mine and the Gold Road Mine, near Oatman.

Banded fluorite from Keenan Camp in Mohave County is rather unusual. The material shows subtle translucent, wavy bands of clear, purple, green, blue and yellow colors, and some with beautiful galena inclusions. Keenan Camp is east of Lake Havasu and west of Wikieup. I carved several pieces of this banded fluorite for the 2013 Tucson, Gem & Mineral Show™ (TGMS), celebrating that year’s Fluorite theme, and they were featured in the 2013 TGMS show program.

Being in Arizona for over 12 years, I have had the opportunity to visit several mines and come across materials not commonly encountered in the major trade gem and mineral shows. I, along with my fellow local lapidaries, have come to love many of these eccentric materials and cut them, even though some are very “dirty-cutting” materials such as the cuprite. I hope that you will share our enthusiasm!

We look forward to your visit during the 2018 Tucson gem shows to see more of Arizona’s eccentric gemmy treasures. And be sure to visit us at our booths at AGTA #1621 and TGMS #1601.